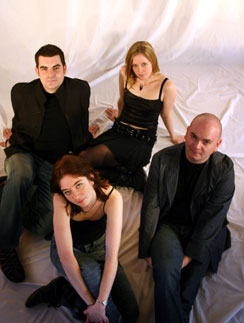 RICHARD ARROWSMITH - voice, melodeons GAVIN DAVENPORT - voice, guitar, cittern JESS ARROWSMITH - voice, fiddle, viola HELENA REYNOLDS - voice, five-string & octave fiddles, bagpipes The melting-together of the four components of Crucible happened, appropriately enough, at Sheffield (a city famous for its strong folk music traditions and connections. Rich, Jess and Gavin began playing together formally (as opposed to just in sessions) in 1997, with the local ceilidh band Hekety, but although they were singing as well as playing at the local pub sessions the idea for a more song-based vehicle probably only gestated in earnest when they joined vocal forces with the even more vocally-experienced Helena. Even then, Crucible as a performing unit only finally settled into any kind of shape in 2002, following a chance meeting at Bromyard Festival that year with Brad McEwan of the Millrace Festival of Traditional Music (Cambridge, Ontario), which led to a demo recording, which in turn that man of exemplary good taste Doug Bailey of WildGoose Studios picked up on then eagerly offered them an album deal, giving them just enough time to make a proper studio recording in May 2003, which was released later that summer as the CD Changeling. That “mad year” saw Crucible catapult from being a session practice group to a newly-established gigging unit with a very healthy fledgling reputation. All four agree that what the bands they’ve learned most from all have in common is – guts! Gav and Helena in particular cite Cordelia’s Dad as a major influence on how to project the music; certainly that band’s uncompromisingly direct, full-on approach has echoes in the way Crucible project themselves, their palpable sense of presence (whether singing or playing), also in how their attitude to their material defines how they come across. Roughly speaking (and this statement too was arrived at by means of all four constructively pitching words and concepts into the discussion in a typical equal-handed fashion!), the Crucible approach to reworking of material is quite sophisticated yet still organic. “Almost agricultural” came the quip from the blue corner! … Undoubtedly earthy, anyway, and keeping some rough edges – and so what, why not? Unlike some of the much-lauded new-generation revival performers, Crucible proudly boast that they don’t just take material from existing recordings and produce what amounts to a “cover version”, which is to all intents and purposes a carbon copy, and a second-hand one at that. As Gav observes, “in traditional music, there’s a real danger that with any song you do there’s already a version someone will know and draw comparisons with”, drawing the absolutely correct conclusion that you’re doing yourself a disservice as well as the story you’re trying to tell, if you’re not performing a version that feels right for you the performer. The band’s extensive gigging since Changeling has obviously contributed to the overwhelming feeling I get when listening to Crux that both vocally and instrumentally Crucible have come on apace (even though I felt Changeling was pretty damn accomplished!). But perhaps it’s the gigantic stride represented by a fundamental shift in their vocal approach that’s the most pronounced (in the sense of strikingly audible) change. Compared to other song-based ensembles, Crucible’s major selling-point is that each of the four is vocally an equal in terms of overall strength, rather than it feeling like a lead singer with a backing band, which allows them to ring changes which keep the mix constantly fresh and exciting. Each is a strong singer, individual and distinctive in timbre, yet they blend together extraordinarily well. As Rich observes, “now there’s an equalisation of parts and a switching round of parts that we couldn’t approach creatively before as we were sort of locked into the predetermined SATB roles and I took the bass part by default, whereas now we do whatever suits the song, and follow no rules other than that really”. Jess elaborated further: “yes, I guess now we’re trying to use the harmonies more as another way of telling the story, not just as a way of trying to make the melody sound more full – the tension we get out of the harmonies creates whatever emotion you want to create”. And emotional impact, emotion communicated direct from the guts if you like, is what characterises the Crux of Crucible.


Wildgoose albums by this Artist 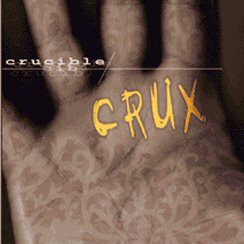 Appearances on other Wildgoose Albums