Someone to Love You 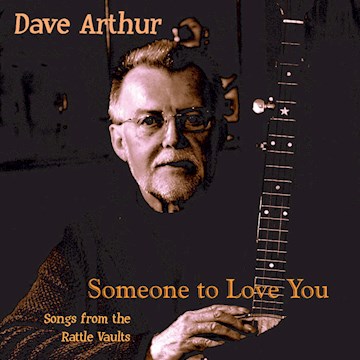 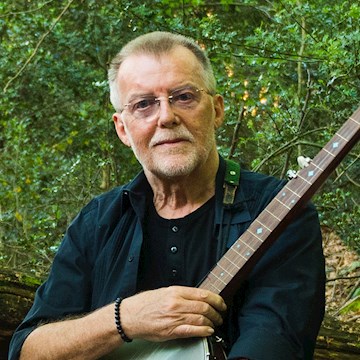 Songs from the Rattle vaults.       Samples of the album can be heard on Youtube at     https://youtu.be/oCYuEth9iLU

Rattle On the Stovepipe came out of an idea I had back in 2003 for an album looking at the crossover of songs and tunes between Britain and the Appalachians (Return Journey). Pete Cooper, Chris Morton and I had such a good time working on the album we decided to stick together and form a string band. However, with Chris living in Wales it became increasingly difficult to get together to rehearse and work on material, so after our 2006 album, Eight More Miles Chris left the band and was replaced by Dan Stewart, who has been with us ever since and together we’ve recently finished our seventh Wildgoose album, Through the Woods (2019).

Someone to Love You is a selection of some of my favourite songs I’ve sung with the band from 2003 to 2017 all greatly enhanced by the fabulous musicianship of Chris, Pete and Dan. As some of the early CDs are no longer available, and later ones will eventually run out, I fancied pulling a bunch of the songs together on one CD before they disappear. Primarily for myself, family and friends, and, of course, anyone else who fancy’s listening to an album of mainly Anglo-Appalachian songs.

It’s a mix of famiiar and less familiar titles but generally not in quite the way you will have heard them before. We always try and make the songs (and tunes) our own. As traditional music has always been in a state of flux, and traditional performers invariably perform their material ‘their way’, we have no qualms about moving, rewriting, or reassembling lyrics, and adapting, changing and in some cases writing new tunes to songs and ballads. If done with love and understanding and respect for the tradition then little harm will come of it. Our original sources are always there in books, on record and in folk music archives to be referred to and appreciated should anyone so wish.

I hope you enjoy listening to the songs as much as I and the rest of the band have enjoyed performing them.

THE GYPSY GIRL
A song once popular on both sides of the Atlantic in various versions, and widely distributed on Victorian broadsides. I can’t remember where I got the lyrics, although not, to my knowledge, from Charlie Poole and the North Carolina Ramblers, or the Carter Family, both of whom recorded a similar set of lyrics. The provenance of tune, however, I do know. It’s a slowed down version of Sam McGee’s ‘Buckdancer’s Choice’. The fast original of which I learned back in the Dark Ages from a private recording I acquired of Tom Paley. I discovered if played at half Tom’s speed, with a bit more ‘swing’, this more laid-back ‘Buckdancer’s Choice’ fitted my ‘Gypsy Girl’ lyrics like a glove.
Dave: guitar/vocal, Pete:fiddle/mandolin/chorus, Dan: banjo
From Old Virginia

BILL DALTON’S WIFE
‘Bill Dalton’s Wife’ was originally a three-verse poem by Appalachian ‘people’s poet’, Don West, father of ballad singer Hedy West. Son of a Georgia farmer, West came from a long line of radical
mountain folk who influenced his lifelong stance against social exploitation, religious bigotry and racism. His outspoken defense of, and admiration for, the Appalachian working-classes caused the FBI to dub him ‘The most dangerous man in the South.’
I wrote three more verses and put a tune to it to turn West’s short, moving, poem into a song to help it reach a wider audience.
Dave: DADGAD guitar, Dan: guitar/banjo/chorus bass, Pete: fiddle/viola/chorus
From Old Virginia WGS 398 CD

RED APPLE JUICE
Along with ‘The Cuckoo’ and ‘Shady Grove’ one of the iconic Appalachian modal tunes. Recorded variously as ‘Sugar Babe (Doc Boggs 1920s) or maybe ‘Red Rocking Chair (Charlie Monroe 1940s). Tragically, nearly twenty years go, my daughter-in-law, Louise, died in her mid-twenties from a brain tumour, leaving a grieving husband and a tiny daughter. With a minimum amount of re-writing I turned this song from a collection of floating verses into a narrative commemorating Louise, and all those who die too young.
Dave: guitar/vocal, Pete: fiddle/chorus, Dan: banjo
From no use in cryin’ WGS 371 CD

STACKOLEE
On Christmas Day 1895 Lee ‘Stack Lee’ Shelton shot and killed Billy Lyons in Curtis’s bar at 11th and Morgan streets, St Louis, in a dispute over Shelton’s fancy Stetson hat. A symbol of Shelton’s success as a pimp. As mindless a dispute as modern ‘road rage’. Machismo can be a killer. For some reason, out of all the murders that were a regular feature of downtown St Louis, this one caught the popular imagination and over 200 versions of the Stackolee story have been recorded, but few as fast as Dan persuaded me to sing this version.
Dave: banjo/vocal, Dan: guitar, Pete: fiddle
From Poor Ellen Smith WGS 419 CD

SHORT JACKET AND WHITE TROUSERS
Cross-dressing (generally by girls) fascinated Grubb Street ballad writers and traditional singers. Many a fo’c’sle or barrack-room entertainer must have lived in the hope of discovering just such a young woman in the hammock or bunk next to his. Introduced to the British folk scene by A.L.’Bert’ Lloyd who unearthed it in Greenleaf and Mansfield’s Ballads and Sea Songs of Newfoundland. Following Bert’s penchant for song ‘tinkering’ I partially rewrote his version following a trip to the tobacco growing area of Virginia and fitted it to a new tune.
Dave: DADGAD guitar/vocal. Pete: fiddle/viola, Dan: banjo
From no use In cryin’

DILLARD CHANDLER
This song, written by Dick Connette, based on the words of North Carolina ballad singer Dillard Chandler in John Cohens documentary film The End of an Old Song, wonderfully captures the importance of the old ballads to the isolated mountain communities of Appalachia. In my ‘to learn’ file for a number of years I was gratefully reminded of it on hearing Roy Bailey’s recording.
Dave: DADGAD guitar/vocal. Pete: fiddle/chorus, Dan: banjo
From no use In cryin’

DEAD HEADS AND SUCKERS
A strange song, the title of which no-one seems able to interpret, although this doesn’t stop them suggesting everything from fish and flowers to military shirkers. Whatever the meaning, it’s a great, driving, song to sing. Learned originally from my old friend Art Rosenbaum on a visit to Georgia in the 1990s. Over the years I’ve added some new lyrics to give it more of a narrative, and following some theories, included a First World War reference for the last verse.
Dave: banjo/vocal, Pete: fiddle/chorus, Dan: guitar/chorus
From Poor Ellen Smith WSG 419 CD

MONDAY MORNING GO TO SCHOOL
A fratricide ballad popular in Scotland from at least the early 1800s, and widely collected in America in the 20th century. From the singing of North Carolina’s Mrs Emma Shelton to harmonium accompaniment. Collected by Maude Karpeles in the 1950s. I have used one if Mrs Shelton’s verses as a chorus and perhaps tweaked the odd word or two.
From no use in cryin’
Dave: DADGAD guitar/vocal, Pete: fiddle/chorus, Dan:banjo

THE DEVIL’S IN THE GIRL
A cautionary tale of seduction and abandonment collected in 1904 by Cecil Sharp from farmer William Nott in North Devon. I came across it originally, minus a tune, in Bert Lloyd’s papers while working on his biography. I had already put a tune to it before discovering Sharp’s transcription of Nott’s version. Not wishing to make a fetish of ‘authenticity’ I’ve stuck to my tune which works for me. Sharp’s is always there if you so wish.
Dave: DADGAD guitar/melodeon, Pete: fiddle, Dan: banjo
From Poor Ellen Smith

THE TWO SISTERS
I first heard this supernatural ballad at a house party in Washington in the 1970s and it’s haunted me ever since. Jealousy, maybe as much as money, is possibly the ‘root of all evil’ - at least in ballads. The murder of one sister by another is the theme of an ancient folk tale and cante-fable known across Europe. As a ballad it has been widely collected in Britain and America. This version seems to have been popularised by the autoharp player Kilby Snow.
Dave: banjo/vocal, Pete: fiddle, Chris Morton: guitar
From Return Journey WSG 313 CD

POOR ELLEN SMITH
Another North Carolina girl who, along with Omie Wise and Laura Foster, failed to heed the ballad warnings concerning unfaithful and cruel sociopath lovers, and paid the ultimate price. A version of the story appeared as a poem in a local newspaper while Ellen’s murderer, Peter deGraff, was still in gaol, declaring his innocence. Found guilty, he finally confessed on the gallows, blaming corn-liquor, cards, dice and bad women for his downfall. First recorded by Henry Whitter in 1924, it’s Molly O’Day’s 1949 driving banjo-led recording that seems to have influenced most subsequent versions. I think my only contribution to the words are the lines, ‘They found me alone, on the dark side of town.’
Dave: banjo/vocal, Pete: fiddle/chorus, Dan: guitar/chorus
From Poor Ellen Smith

BLOOD RED ROSES
The evocative, surreal, and possibly meaningless ‘Go down you blood red roses, go down’ chorus of the shanty, insinuated into the folk scene by Bert Lloyd and sung by him in Houston’s whaling film Moby Dick, inspired me to write a narrative version incorporating the mysterious chorus.
Dave: guitar/vocal, Pete: fiddle/chorus, Dan: guitar/banjo/chorus
From Poor Ellen Smith

BLACK BOTTOM BLUES
A 1920s ragtimey blues warning of the dangers and temptations of such red-light districts as the Dallas, Texas, Deep Ellum downtown area. A magnet for blues and jazz musicians, good-time girls, gangsters and drug pushers. In the notorious alley aptly nicknamed ‘Death Row’ someone got killed every Saturday night. I put this version together from random verses taken from early recordings of ‘Deep Ellum Blues’ and ‘Black Bottom Blues’ - variations of the same song, but no-one knows which is the ur-version.
Dave: guitar/vocal, Dan: banjo, Pete: fiddle
From Poor Ellen Smith

FATHER, FATHER, BUILD ME A BOAT
A song widely sung in Britain and the USA under such titles as ‘A Sailor’s Life’, ‘Early, Early, All In the Spring’, ‘Sweet William’, and, on a Catnach broadside,‘The Sailor Boy and his Faithful Mary. I put this version together from a set of words I learnt in the 1960s, collected by Frank Kidson from Mrs Hollings, a Lincolnshire charwoman. The dramatic ‘Sailors, sailors, dress all in black’ verse came from Gavin Greig’s Folk-Song of the North-East, and the tune is Doc Boggs’ waltzy Victorian parlour melody, used by him for ‘Papa, Build Me a Boat, his Virginian take on the song.
Dave: DADGAD guitar/vocal, Chris: guitar/mandolin
From Eight More Miles WSG 333 CD

EIGHT MORE MILES TO LOUISVILLE
My more Folk Baroque than Bluegrass interpretation of the ‘Grandpa’ Jones classic, which I first learnt from Americans Sandy and Jeannie Darlington. Their infectious enthusiasm for Old Time music was an inspiration to many on the London folk scene in the 1950s and ‘60s.
Dave: DADGAD guitar/vocal, Pete: fiddle/chorus, Chris: guitar/chorus
From Eight More Miles

I WISH I HAD SOMEONE TO LOVE ME
A cri de coeur with its origins in London in the 1826 Joseph Wade song ‘Meet me By Moonlight’.
Seemingly, somewhere along the way it got mixed up with the English folksong ‘Here’s Adieu to All Judges and Juries’ and ended up in America. There it underwent further evolutions, including the popular ‘Prisoner’s Song’. I learnt it from the singing of Jeff Davis, whom I first met in Laurenburg, North Carolina, in 1972, when we were both much younger!
Dave: banjo/vocal, Pete: fiddle, Chris: guitar
From Return Journey 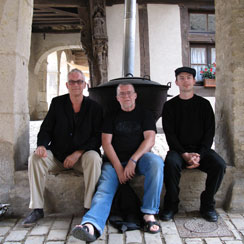 Rattle on the Stovepipe