Out of Hand (Too Young to Drive the Bus)

by Out of Hand 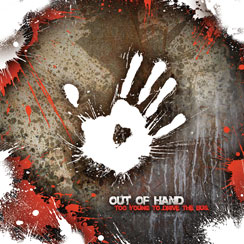 Price: £9.99
WGS429CD
Also available as a download from Amazon and other sites 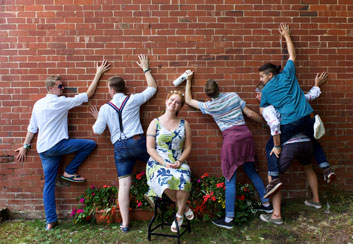 Visit artist page: Out of Hand

Stuart Duncan, Will Sartin, Penny Kempson, David Dailly, Richard Portlock, Chris Campbell are the band ‘Out of Hand’ They are vibrant and play with the energy that belongs to young musicians. They are fast becoming one of the most danceable bands on the UK ceilidh circuit. They have already played at most of the major UK folk festival including, Sidmouth, Towersey, Chippenham and Shrewsbury as well as having played for EFDSS ceilidhs.

The band came together while they were members of the National Youth Folklore Troupe of England (NYFTE) who have been training and encouraging young traditional musicians for many years now and do a wonderful job of making sure the tradition is in good hands.

An upbeat set which describes our downbeat political views!

We’ve been playing this tune for a while outside the band, and thought it was time for it to jump onto the album. Fantastic to have the wonderful Paul Sartin join us too – this one was a lot of fun to record!

A couple of jigs, changing it up for a bassy breakdown. Listen out for a bit of something different…

We’d only ever heard this first tune played as a slow air, and found that when you speed it up it becomes something pretty damn danceable!

A tune which was written in France as Gratin D’automne, which turned into Questionable Potato Bake when trying to translate the name to the rest of the band.

A tricksy little tune which Stu brought to the band – we recently listened to Niall’s original version and were shocked how much we’d changed the tune, so here is our homage!

The first is a pretty french tune that Richard taught us. And a big thanks to John Wilde for giving us some beautiful flute lines on the second tune!

This fast-paced reel is like a canoer going through the rapids – twisty and turny but still fun to play!

Essentially 'Out Of Hand' are a ceilidh/dance band and having played at a number of major festivals throughout the country already have a large enough following to justify making this their debut album. The sub-title of this CD is very apt because the average age of this group is 21!

As this is their first recording and are not particularly well known (yet!) in the North-West let's introduce them; we have David Dailly on rhythm guitar, Chris Campbell on drums, Penny Kempson on fiddle, Will Sartin on mandolin and cittern, Richard Portlock on bass guitar and rhythm guitar and Stuart Duncan on whistles and recorder.

They kick off with a lively rendition called The Economy Jig Set which immediately sets the tone of the album showing their musical mastery and, equally important, the way they blend so well together as a unit.

The 10 tracks are all instrumentals some traditional from the British Isles and America and some written by the band members. Other tunes are by well known and respected musicians such as John Kirkpatrick with his Jump At The Sun which I remember was one of the Electropathic's (remember them?) regular tunes, Mike McGoldrick's Farewell To Whalley Range and John McCusker's Goodnight Ginger.

The tunes in each set move seamlessly from one to the next with reels, jigs and waltzes. This definitely isn't a 'diddly-diddly' type album proved by the fact that there are French influences here like Penny's Gratin D'automne and a waltz from Sylvain Butte called La Petite Salopette. Also, the track Beyond Words from the pen of Niall Vallely starts with a simple chord and light percussion showing the group's panache for interesting arrangements.

There are guest appearances from Bellowhead's Paul Sartin playing second fiddle in the Late Lunch set and John Wilde plays flute in the Waltzes set.

This is a smashing album and will find an almost permanent place in my car's stereo system but I promise to resist the urge to dance while driving! If this band is the future of dance music then the future is bright. It's available at the band's gigs and from the Wild Goose web site and is distributed by Proper Music Distribution.

With an average age of just 21, the six-member Out of Hand are one of the youngest and freshest ceilidh bands on the English and Welsh folk circuit. An offshoot of the National Youth Folklore Troupe of England (NYFTE), the musicians are scattered all around the country. They have already played at UK folk festivals, including Sidmouth, Towersey, Chippenham and Shrewsbury; prominent stages like Cardiff, London, Cornwall and Manchester have experienced visits from the band, often tightly squeezed into a minibus, which none of them holds a licence to drive – in fact, the subtitle of this promising debut album is Too Young to Drive the Bus. Not to be outdone, the father of one of the band does the indispensable job of transporting every man-jack (or woman-jack) to the next gig.

This band are really special, and NYFTE have done a fabulous job in seriously cutting their teeth. All are fine musicians, and as ceilidh bands go, Out of Hand’s enticing collection of jigs, waltzes and reels just can’t be beat – a definite thumbs-up!

The album title says it all really. The members of this young ceilidh band might not qualify for a licence yet they tend to be driven around by one of the band members' dads but they show plenty of oomph on their debut album. A six piece who met up on tour with the National Youth Folklore Troupe of England, their music is a lot catchier than their album name.

The repertoire here is a pleasing mix of selfcomposed tunes, some French influences and a solid foundation of British traditional styles. Fiddler Penny Kempson is the only female contributor and she is often to the fore, especially, as you might guess, on the tunes billed as the Fiddlers Set, which also features John Kirkpatrick's Jump At The Sun. Other familiar names represented in the tune choices are those of Michael McGoldrick and John McCusker, but, in the main, Out Of Hand plough their own furrow, as a band to listen to or to dance to.

They do have the help of Old Bellowheadian Paul Sartin on one track, and of flautist John Wilde on another. I can't claim to be the biggest fan of the recorder, played here as well as whistles too much primary school spittle for comfort.

On repeated listening, though, it is the bass guitar work of Richard Portlock that catches the attention and does much to give the band its distinctive sound.
Dave Hadfield

Out of Hand are a refreshingly young, energetic and skilful band who are becoming very well known on the English ceilidh and festival circuit, and quite rightly so! This is their debut album, full of wellarranged, catchy tunes, some written by band member Penny Kempston, some trad., others by the likes of John Kirkpatrick, Mike McGoldrick and John McCusker.

The music is a selection of jigs and reels with a waltz and a slip jig added for variety, all played with the verve that comes from having a band full of dancers who know their stuff (they were all part of NYFTE the National Youth Folk Troupe of England, which is where they met). Because of this the tunes are all very danceable, with the right amount of lift and drive, but also extremely easy to listen to, with clever arrangements giving each of the lead instruments plenty of chance to shine, with the light and shade provided by the rhythm section adding to the interest.

Guest musicians Paul Sartin and John Wilde make appearances on two tracks and the album was recorded and produced by Doug Bailey at WildGoose Studios with his usual care and precision.

This is a splendid debut album from a band with a great future maybe soon one of them will be able to drive the bus!
Barry Goodman