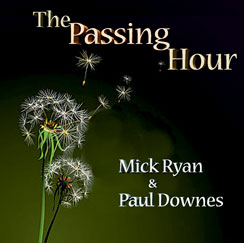 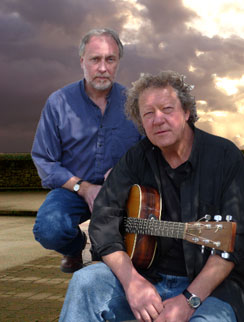 This is the fourth Ryan and Downes duo album. Mick and Paul have also worked successfully together on the albums of Mick’s popular folk operas The Navvy’s Wife, The Pauper’s Path and A Day’s Work. Prior to their current collaboration, they were both very well known in their own right.

Paul worked with Phil Beer, firstly as a duo and then in The Arizona Smoke Revue with Bill and Pete Zorn. He has played on literally hundreds of albums, and is widely regarded as one of the very best acoustic guitarists in any genre. Similarly, Mick is considered by many to be one of the best singers and songwriters. In addition to writing several other successful folk operas, he was in the still fondly remembered band Crows and in a highly rated duo with Pete Harris, with whom he also recorded five albums.

This album combines more new songs from Mick, together with the best work of other writers and some excellent, but rarely heard, traditional songs.

Paul and I were doing a gig at Faversham Folk Club when we heard Helen North sing this.

I learned this, about thirty five years ago, from Annie Fentiman. It sounds Scottish to me. In the long time I have been singing it, I will have changed, and Anglicised, the words.

I wrote this some years ago. It was so long ago that I now have no recollection of how it came about. It is, fortunately, self explanatory.

Forty years ago, I heard Terry Yarnell sing this on an LP by The Critics Group. I have never heard anyone else sing it, though Dave Burland used to sing The King George Hunt to the same tune.

This song of regret arose from a meeting Tom had with a man in America who had always wanted to be a sailor - but had never even seen the sea.

I found this in The Complete Irish Street Ballads (Collected and Annotated by Colm O’Lochlainn).  I have never heard it sung.

This arose from a conversation with a friend. Having seen my Great War folk opera, A Day’s

Work, she told me the story of the ‘Thankful Villages’. These were those lucky places whose sons  all came home alive from the war. It occurred to me that, while ‘alive’ was one thing, ‘and well’ might be quite another.

I was looking for the traditional song of the same title and, when I couldn’t find it, made up a new version.

We heard Steve sing this lovely song of farewell at Topsham Folk Club. We just had to have it!

The idea for this came from a short novel by Rosemary Sutcliffe. Warrior Scarlet tells the story of a slightly disabled boy trying to become a man in a tough, bronze age, tribal world. A very moving moment occurs when he waits in the dawn to kill a swan as it rises above him from the edge of a lake. It is a thing of exquisite beauty that he has to kill in order to survive.

I read somewhere that, since the end of the Second World War, there has been only one day when, so far as we know, nobody was at war with anybody anywhere in the world. One day!

A friend, who had lived in Spain, told me the story of how the owner of her local bar had kept the last will that his grandfather had written the night before he died in the Civil War. She showed me her translation, which was the basis of this song. It was unclear for which side the man had fought. At this remove, I’m not sure it really matters any longer.

This is from my (1998) folk opera, The Voyage. The show was about emigration to America from England and Ireland in the 1840s. Many of the emigrants had never seen the sea, and none of them could possibly have imagined the scale and ferocity of the ocean beyond the sight of land.

The idea for this came from reading Lark Rise To Candleford. A certain chapter deals with the importance of the family pig to the diet of the villagers. Each family slaughtered their beast at a different time and shared the meat around amongst their neighbours. By these means, everyone had a bit of meat at all times. The book points out that every part of the pig was used, ‘except the squeak’! Given this very English origin, I really don’t know why I have written it in the style of a certain kind of Irish song, but there y’are.

Mick Ryan is undoubtedly one of the best, possibly the most underrated, songwriter on the folk scene today. The Passing Hour is the fourth release by his duo with ace guitarist Paul Downes, and includes his own material plus some covers and traditional songs, too. It's all performed in a clear and uncluttered fashion with Mick's warm, rich tones and Paul's singular accompaniment on guitar, banjo and piano, helped along by friends on viola, cello and concertina.

Mick's songs manage to pin down issues with economy, clarity and sensitivity, as in 'Thankful Village', which reflects local gratitude when soldiers returned alive from the Great War, despite mental and physical scars. 'One Day' serves as an anthem to the one and only day of peace in the world since World War II.

On the other side to his writing, Mick creates nimble and witty lines in two songs about pigs, one of which, 'Oh! Swine!', details how all parts of the pig can be eaten: 'all that's unused is his squeak'. Three covers and three traditional songs are excellent, and not well known, and they fit neatly alongside Mick's own stuff. It's another great album by Mick Ryan and Paul Downes. Recommended!

The fourth duo album by singer Mick Ryan and musician Paul Downes follows the bynow well-established pattern, combining a healthy quotient of songs from Mick's own pen (seven this time, including one co-written with Paul) with a choice selection from other writers and three comparatively rarely heard traditional songs.

Mick and Paul are justly regarded as among this country's very finest folk performers, and so the hour passes lightly, for the listener is made to feel as much at home in their company as Mick and Paul evidently do themselves. Paul's dextrous and sympathetic guitar and banjo playing proves such a superb foil for Mick's sturdy, brilliantly controlled singing, whatever the mood or message of the song. And on their latest recording they also variously engage three extra musicians � Jackie Oates (five-string viola), Kate Riaz (cello) and Martyn Bradley (concertina) � who sensitively but tellingly embellish the tapestry on a number of the songs in a perfectly judged and entirely apposite way.

Highlights of this new collection are traditional-sounding opener The Midshipman's Boast (a Helen North composition), an affectionate song of farewell Adieu, Old Friend (by Steve Thomason), and three quite different but equally thought-provoking warthemed songs (Thankful Village, One Day and, best of all, the a cappella Last Will). Elsewhere the emotional barometer swings from fond lyricism (the disc's title number) to porcine ribaldry (The Parson And The Pig and favourite live set closer Oh! Swine!) via the sprightly gait of Bartholamew Fair, while The Sea is a revival from Mick's 1998 folk opera The Voyage. As ever, Mick and Paul's choice of material is nigh impeccable, well suiting Mick's expressive capabilities.  It can of course be taken as given that both men are on top form here, and their partnership continues to demonstrate the wholly natural rapport that has carried them through close on a decade of collaboration both on disc and in live performance. No change there, then.

Mick is considered by many to be one of the best singer songwriters, while Paul is widely regarded as one of the best acoustic guitarists in any genre. This, their fourth collaboration, combines more new songs from Mick with some rarely heard traditional songs and examples by other writers. The understated arrangements beautifully accompany the lyrics and allow the quality of the material to shine through. To fully appreciate the songs you need to read the backgrounds explained in the sleeve notes provided.

This is the fourth album from these two fine performers. It opens with The Midshipman's Boast from the writing of Helen North at Faversham Folk Club and sets the high standard by which these two are renowned. The majority of the tracks however, come from the imaginative writing of Mick. Thankful Village is one such which illustrates the horrors of war even for those that survive. The Parson and the Pig is written in a lighter mode while The Fowler is another serious statement about life and death in an earlier time. One Day is a powerful anti-war song and the driving rythym of The Sea underlies this song from Mick's folk opera The Voyage. Old Swine completes the album nicely in frivolous mode with some natty banjo accompaniment from Paul.

Other notable tracks include a brilliant rendition of Tom Lewis's superb All At Sea and the traditional Song of Repentance which brings out Mick's Irish heritage!

Another song from the tradition, Bartholamew (sic!) Fair lilts along beautifully with the help of Paul's guitar and Jackie Oates viola as accompaniment. On other selected tracks Jackie adds vocals, Kate Riaz cello and Martyn Bradley concertina. Throughout the album Paul plays guitar accompaniments that are truly inspiring and adds excellent harmonies to the chorus songs.

Another truly enjoyable album from these two seasoned performers.

Not counting their work together on Mick's folk operas, this is the duo's fourth album together. The previous three were all assured, comfortably disquieting, eminently listenable sets. This continues and consolidates that trend. Paul is the ultimate accompanist   a masterful guitarist, who also contributes some impressive banjo (see the opening and bonus tracks in particular), vocals and piano. Mick is a fine singer with a fine eye for detail and a great ear for a good song. These two strengths are the foundation of their album's power.

Mick's own wonderfully crafted songs (eight of the 13 tracks are songs drawn from right across his writing career) sit alongside imaginative readings of traditional songs (three here, including an aptly swirling rendition of Bartholomew Fair with reeling viola from Jackie Oates) and little known gems of songs written from within the tradition.

One has a real sense of Mick and Paul sitting in a folk club (perhaps waiting to play their headline slot, perhaps just part of a singaround) and hearing a singer come out with a song they know they have to share with a wider audience   for example, Helen North's Midshipman's Boast, Steve Thomason's exquisite Adieu Old Friend and, especially, the sublime and deeply moving All At Sea by Tom Lewis, enhanced by Martyn Bradley's achingly maritime concertina.

A highlight is the eminently singable title track, which anyone who has been part of a musical occasion is guaranteed to relate to, pearls of observation threaded with Kate Riaz's deft cello.

And special mention must be given to the bonus track   a laugh out loud porcine singalong that draws inspiration from Lark Rise.