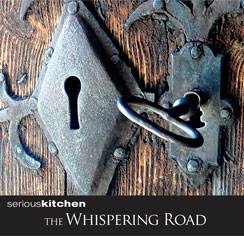 Price: £9.99
WGS413CD
Also available as a download from Amazon and other sites 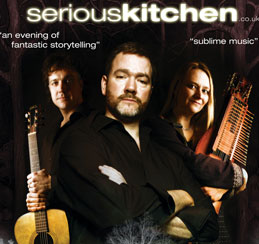 Bubbling with vivid imagery and thrilling music, The Whispering Road is a story you’ll never forget. Leaping between song, music and the spoken word seriouskitchen deliver an electrifying performance leading the audience on a fantastical journey to a land where every bird and beast has power and every encounter a deeper purpose.

The Whispering Road is brought to life with the accompaniment of traditional Scandinavian music on the Swedish nyckelharpa (keyed fiddle), kohorn (cow horn), accordion, guitar and three-part close harmony singing.

Seriouskitchen draws on the rich heritage of Scandinavian myths and stories to bring you a show blending Nick Hennessey's spellbinding storytelling with Vicki Swan & Jonny Dyer's renowned musicianship and their collective wealth of experience of Nordic traditional folk culture.

Seriouskitchen comprises: Nick Hennessey, who lives among the gentle hills of South Cumbria, is an internationally renowned storyteller and singer. He has performed across the world, in Japan, Canada, the United States and frequently throughout Scandinavia, in particular Finland where he has been researching the epic-singing traditions of Karelia over the last 12 years.

Vicki Swan is the UK's leading expert in the Swedish nyckelharpa* and a second-generation piper. A Royal College of Music postgraduate, she is now bringing the nyckelharpa to a wider audience in the UK with her nyckelharpa UK project. As a fluent Swedish speaker and brought up surrounded by Swedish traditions Vicki is perfectly placed to perform Swedish music. In addition to the nyckelharpa Vicki also plays the little known Swedish bagpipes and willow flute.

Jonny Dyer; a performer, arranger and composer whose outstanding technical ability, coupled with a wide-ranging musical taste has made him a tireless and forceful musical innovator. He has become critically renown for his contemporary interpretations of traditional song. He also plays bouzouki, accordion and kohorn. He is probably the UK’s leading exponent of this ancient Viking instrument.

What on earth is a Swedish nyckelharpa?  The nyckelharpa is a traditional Swedish instrument that has been played, in one form, for more than 600 years. It is a keyed fiddle, slung around the neck and played with a bow. The nyckelharpa is, without doubt, one of the most ethereal of instruments you will ever meet with its fabulous chromatic sympathetic resonating strings creating its unique otherworld sound.

This is a story album and has some track marks to enable different parts of the story to be selected.

Serious Kitchen are internationally renowned story teller Nick Hennessey and popular internationally well known musicians and singers Vicki Swan and Jonny Dyer who joined up in 2012 to produce the show 'Whispering Road'. With so much individual talent this trio is bound to make an impact with anything they produce. This CD is no exception and it features a story based on two Scandanavian legends with musical and vocal accompaniment.

Nick is probably one of the best story-tellers on the folk scene as well as having a good singing voice and Vicky is the UK's leading expert on the Swedish nyckelharpa and also has a great voice. Finally, Jonny is a fine singer and instrumentalist and, on this CD, plays accordion, guitar and kohorn (cow horn!) to great effect. The close harmony singing on this album is also superb.

You might think I'm going over the top in my overall praise for this album but I'm not the only one because the show was nominated for The British Awards for Storytelling Excellence and I quote from one of the nominators who stated:

'I found the whole performance completely enthralling. Not only was the tale related beautifully but the accompanying music enhanced it wonderfully.'

Without wishing to give the plot away, let me just say that the story involves a handsome prince, a beautiful girl, an otter, a raven and a wolf and, of course, trolls! Nick holds the listener's attention throughout with his excellent characterisation of the participants and the accompanying music provides a very appropriate atmospheric background. Vicky is fluent in Swedish and is therefore very well placed to perform the Swedish songs and words that form part of the story.

The one question that came to mind when I was listening to this album was 'Would it bear repeat listenings once you know the complete story?' The answer has to be 'Yes' because the plot is so involved, the delivery so entertaining and it is quite a long tale too that I'm sure I shall be making a return to it several times in the future.

This album is a must for afficionados of traditional tales and will also appeal to those who normally don't venture into the genre.

Over the last five years, Vicki Swan and Jonny Dyer have established themselves as one of the most accomplished and talented duos on the folk scene. Another of the performing irons that they have in the fire is giving shows with the master storyteller, Nick Hennessey � and this is Serious Kitchen.

The spellbinding long story presented here is of Scandinavian origin � frightening trolls, handsome prince, talking animals � the lot! Nick has a great skill and grabs the attention throughout. Vicki & Jonny provide the music and the singing; sometimes as an augmenting background, sometimes as an interlude and at other times to accentuate important moments in the mounting tension with usually multi-instrumental Vicki sticking to her Swedidh Nyckelharpa for this show and basing much of the music on her roots in Swedish music.

The modern storyteller is often a performance artist but even on an album without the visual appeal, this is pretty gripping stuff.

What an intriguing premise for a CD, neither solely spoken word nor solely music, so it might be tricky for music shops to decide where to file this release. Somewhere near Ivor Cutler, I suppose! Vicki Swan and Jonny Dyer will probably already be well known to Folk London readers as a nyckelharpa (Swedish keyed violin) and guitar duo, but are joined on this recording by storyteller, Nick Hennessey.

This is the studio CD of a live story telling with music show and is suitable for children aged 8 and upwards. There are two Scandinavian stories narrated here but there are standalone music sections, plus incidental music under the speech, and songs. Unusually for a folk release, the sleeve notes are tantalisingly short, but the music includes polka tunes by the 19th century 'legendarisk nyckelharpospelman' Byss Calle, 20th century legendary nyckelharpa player Eric Sahlstrom, Trollmors Vagvisa by Margit Holmberg (which as far as I can find out easily is a wellknown Swedish children's song about a singing Mother Troll: thank you Swedish Wikipedia!), newly written songs by Hennessey & Dyer and some tunes merely labelled Trad. I'd love to have had a bit more information about the music.

The track numbers aren't listed next to the tune titles, so it is tricky to isolate the music alone. This is deliberate, as the performance is seen as a synthesis of the art forms, but I'd like to have been able to listen to the music on its own. Even simply including the music tracks alone as an addendum at the end of the CD would have made it more useful for me to use this recording in my teaching, but I suppose the obvious answer to that would be to book the artists to come into school and do it all for real!

Beautifully performed and recorded, I really enjoyed this CD in its own right, and not just in terms of a teaching tool. It is an interesting concept well delivered. If for any reason you can't read your children a bedtime story yourself this would be a useful recording, but it has enough to keep adults interested too. Highly recommended.

It was a Saturday morning and my wife had gone to the local supermarket leaving me my normal list of household chores to do. For what I thought was going to be background music, The Whispering Road by Seriouskitchen was placed in the CD player. From the opening notes of a strange wind instrument and the haunting vocals asking to "seek me, find me, come to me", I realised this was something different.

Seriouskitchen have been developing this work for a number of years and via a number of performances, before they thought it ready to record for posterity. It is basically two stories from Sweden and Norway, joined seamlessly together with music written in the style of Scandinavian traditional song. The stories are told by well known storyteller, Nick Hennessey, who uses all his skill from years working in the oral tradition. The style is akin to poetry, as every word is there for a purpose (change of pace and volume, strong adjectives, repetition) to make this story come to life. For me, it the use of silence that is really special.

Vicki Swan plays nyckelharpa, and Swedish bagpipes   who knew they existed   as well as being fluent in that language. It is her voice that provides the haunting songs here, whilst Jonny Dyer plays lots of stringed things. He is also responsible for the wind instrument mentioned earlier which turns out to be the ancient Viking instrument, the Kohorn.

No spoilers here, but The Whispering Road is about a ring (not the same one as Tolkein's, but equally as epic), a prince on a quest, and trolls, with lots of other elements on the way.

Before hearing this offering from Seriouskitchen, I would have doubted that a story in the oral tradition would have worked on CD. This has completely changed my mind. It benefits from repeated listening and some tracks are good enough to stand alone.

Doug Bailey at Wildgoose has done a great job in capturing the feel and the clarity of this recording. At all times the voice is brought right to the front, whilst the instruments are just at the right level. I really hope to see a live performance of The Whispering Road soon because I am sure it will be something special.

I urge you to spend 70 minutes listening to what is an unusual CD. I did. My jobs had to wait. They got done eventually. 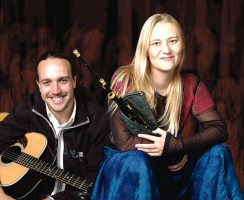