Only Remembered - A Retrospective 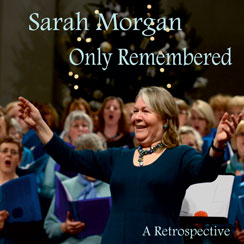 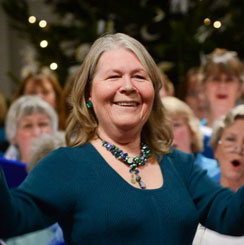 This album includes examples of Sarah’s singing in all the major collaborations to which she contributed and also includes many examples of her solo singing, which was always a pleasure to hear. We have been very selective in the choice of songs (there is an absolute wealth) always going for the ones in which Sarah was leading. There are also a couple of studio tracks which were recorded for a friend’s birthday and samples of songs from a live recording which was never commercially released. There are two tracks which were recorded at home as practice tracks and were never planned to be heard in public at all – the recording on these is far from perfect but they are lovely examples of her singing. The recording on many of the older tracks and the live performance tracks is not studio quality but we have done our best to make them enjoyable to listen to. As the saying goes, never mind the quality feel the width!

Sarah was born in Epsom, Surrey, into an RAF family. She inherited her father’s love of music and his wicked sense of humour; also her mother's love of nature. She performed in musicals at her church youth group as a teenager, and a boyfriend encouraged her in solo singing. In the 1960s, she became immersed in the vibrant folk scene and sang both solo and with Don Morgan as duo Curate’s Egg. At that time, teaching was her profession and music was her hobby. Her early experiences of teaching in the poorer areas of Liverpool kindled her life-long desire to enable development in others.

Sarah has always enjoyed singing with other people, whether accompanied or a capella harmony singing. Over the years she has worked with Mary Eagle, Bread & Roses, Hen Party, the trio Craig, Morgan, Robson and latterly has been doing some work as a duo with Jeff Gillett. In later years, her hobby became her profession. She performed regularly as well as composing, arranging and leading harmony workshops at folk festivals.

In 1999, she was asked to take on the leadership of a village choir. She applied and developed the model conceived by Roger Watson of TAPS: open access, no auditions, learning by ear rather than sight-singing, and a repertoire which was based largely on folk songs. This set her apart from many community choir leaders of the time, whose focus was on world music. She founded community choirs in Winchester and Andover with English folk music at the heart of their repertoires. Many of the arrangements were her own, developed either because there were no existing arrangements or any that she could find were too complex for her vernacular choirs. Recently, she ran conferences on community choirs at Winchester University and at the folk arts centre Cecil Sharp House in London.

Sarah completed an English degree as a mature student at Reading University and in the last weeks of her life she finished her doctoral submission and her Professional Doctorate was awarded posthumously by Winchester University. Her thesis, Community Choirs - A Musical Transformation: A Review of My Work in Management, Music, Choir Leadership and Folk Song, will be published as an e-book. The Sarah Morgan Foundation is being created to continue her work and proceeds from this album will go to its fund.

1 Through the Groves
Trad.
from New Wood, with Mary Eagle, Neil Stanford, Keith Marsden, and Helen Hockenhull on vocals. These are the oldest recordings on the album.

2 Seven Summers
Dave Goulder
from a Forest Tracks live recording in 2012 with Jeff Gillett on guitar.

3 The Wind and the Rain
Trad.
from Nobody Here But Us - Hen Party. WildGoose Records.

5 Keep you in Peace
Sarah Morgan
from The Heart Gallery – a Hen Party album but with Sarah solo. WildGoose Records

9 Sprig of Thyme
Trad
this is a home recording done for rehearsal purposes.

10 In the Wild Wood
Graham Moore
recorded at WildGoose for a friend but never released.

11 Low Down in the Broom
Trad
from Peppers and Tomatoes – a CMR album but with Sarah solo. Reiver Records.

15 Lord Derwenwater
Trad
from The Axford Five, with The Askew Sisters on backings. WildGoose Records.

17 The Flowers and the Wine
Pete Atkin / Clive James
from the Forest Tracks live recording with Jeff Gillett guitar.

18 Only Remembered
Trad
from Peppers and Tomatoes – CMR. Reiver Records.