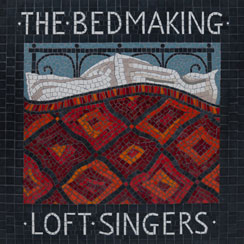 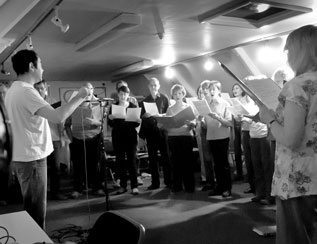 The Andover Museum Loft Singers are a community choir based in Andover, Hampshire. The choir was formed in 1996 and sings unaccompanied harmony arrangements of local and other English Folk Music. Music arranged and conducted by Paul Sartin

1 An Acre of Land


Sung by Frank Bailey of Combe Bissett, Wiltshire on 3rd August, 1904, to the composer and collector Ralph Vaughan Williams, who published it in ‘Bushes and Briars’. It’s part of the Scarborough Fair group of songs, which in turn are descended from the ‘Elfin Knight’ ballad.


From the singing of Dick Frost (1939-) of High Wycombe, and arranged for choir stalwart Paul Howland who hails from the town. Tom Burt’s Hill, mentioned in the song, is situated between Marlow Hill and Carver Hill Road.


Mrs Marina Russell of Upwey, Dorset, from whom this tune was collected by the Hammond brothers, was a Sartin by birth – Paul’s ancestor. The Hammonds found a set of words in nearby Halstock, from George Udall, which have been supplemented by ones from Benjamin Arnold of Winchester.


Collected by S. Paton, this arrangement is especially for choir member Mike Barrie, who hails from the North East.

5 Come Write Me Down


From the repertoire of the acclaimed Copper Family of Rottingdean, and known also as ‘The Wedding Song’, this was scored out for the marriage of former Loft Singer Shirley Fergusson.


Collected by the Reverend Sabine Baring-Gould, better known for his hymn ‘Onwards, Christian Soldiers’, from Charles Arscott of South Zeal and Harry Westaway of Belstone, Devon, and published in ‘English Minstrelsie II’ in 1895.

7 Pleasant Month of May


Another song from the Copper Family of Rottingdean, first recorded by James and Bob Copper in 1951.


The text is a compilation of versions from Alfred Porter (73) of Basingstoke Workhouse and Henry King (75) of Lyndhurst, taken in 1906 by John F. Guyer and Dr George Gardiner. According to a note at the top of the manuscript it is ‘Indecent’! The tune is from James Saunders (77) of Newcastle, noted on 2nd September, 1910, by Cecil Sharp.


Also noted from James Saunders on the same day, a second number dedicated to Mike Barrie.


Featured on broadside ballad sheets during the nineteenth century, this rapidly entered the aural tradition; James Brown of Basingstoke sung his version to Dr George Gardiner in August, 1906.


Paul first heard this performed by local musicians Mick Ryan and Pete Harris. The traditional words were set to music by Ian Palmer.


From Henry Norris, Farnham Union ( April, 1909) and William Randall, Hursley ( June, 1905) via Dr George Gardiner, this has a touch of Music Hall about it.


A less-familiar version of a well-known song, taken from labourer Henry Lee of Whitchurch, Hampshire May, 1906 by Dr George Gardiner, with additional words from Wiltshire.


A Liverpool song for Loft Singer, conducting assistant and Scouser David Hughes, the melody of this found fame as the theme to ‘Z Cars’. It was first published by collector Frank Kidson in 1891.

The Singers (named after their main practise venue upstairs at the Andover Iron Age Museum), were formed in 1996 by Roger Watson, following a TAPS community project, and are now led by Paul Sartin. Members are drawn from all ages and walks of life, many having little or no previous experience of choral singing, but all can join in because songs are taught by the traditional 'lining out' method. They sing three- or four-part unaccompanied harmony, influenced by West Gallery and other singing traditions such as the Copper family, and perform regularly, sometimes with other community choirs, for concerts, seasonal celebrations and community events. The repertoire reflects both local sources and links with individual choir members' origins or activities, giving the whole album a very rooted feel.

It's the arresting choral arrangements which give this CD such appeal, with suitably atmospheric chords, spiky harmonies and occasional unison used to bring out the integral mood of each song's story. Tracks which stand out: a lovely version of the Coppers' old favourite 'Come Write Me Down', the strongly rhythmic shanties 'The Hog's Eye Man' and 'Homeward Bound', a suitably melancholy 'The "New" Deserter', and a jaunty version of the title track 'The Bedmaking with its coincidental reference to 'up aloft' - perhaps that's why they chose it! Three of the 15 tracks have sparing accordion accompaniment (from Paul Hutchinson) which adds rather a lush quaility to the harmonies as in 'All in a Row'. The unexpected scene stealer is a left-field arrangement of 'Johnny Todd' which catchesyour attention with its grainy introduction and holds you in its web until the sudden conclusion - magical.

Every word is crystal clear, with conducting adding expressive touches by changing pace at appropriate moments; the Loft Singers must have a lot of fun!