The Paupers Path to Hope 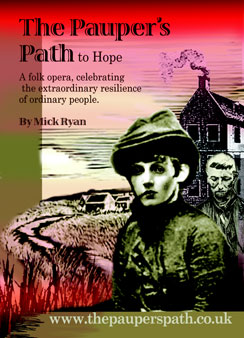 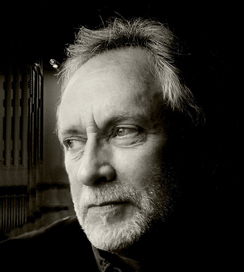 THE PAUPER'S PATH to Hope. A folk opera, celebrating the extraordinary resilience of ordinary people. By Mick Ryan. Another folk opera by the author/composer of 'A Day's Work', 'The Voyage', 'Tanks For The Memory' and 'The Navvy's Wife'.

The New Poor Law, of 1834, was an honest, if ill conceived, attempt to provide 'relief' for the ‘genuinely’ needy, whilst deterring 'the undeserving poor'. The 'Union Workhouse', then, was a harsh place. Those who sought its shelter, did so voluntarily, but unwillingly. On arrival, they were segregated (men, women and children going separate ways), disrobed, relieved of all personal belongings (these were returned upon departure), washed (often actually fumigated), dressed and put to a regime of work and silence. The work done included picking oakum (mostly by women), breaking stones (by men) and (when their was nothing else) 'turning the mill'. This was a two-man device which produced nothing but sweat and (supposedly) virtue. There were no clocks, and in the brick of the workhouse at Southwell you can still see the rough sundial etched into the brick of the wall of the exercise yard by a desperate inmate. In the words of the authorities of the time, 'The Workhouse is an institution of benevolence. We teach them all, and especially the children, all they need to know to be useful members of their class. Reading, writing, gardening, sewing, industry, usefulness, virtue.'

In the words of Thomas Carlyle (1839), 'The New Poor Law is an announcement that whosoever cannot work ought not to live."

Through original song, music, verse, monologue and dialogue, 'The Pauper's Path' tells the story of seven people forced by circumstances to enter the dreaded workhouse of the nineteenth century, but able, by strength, determination and love, to escape its clutches.

Words and Music by Mick Ryan

THE SONGS (All Words and Music by Mick Ryan, except as indicated)

This is a 2-CD set of Mick Ryan's commissioned folk opera which dramatises the era of the workhouses which were set up in the 19th century following the passing of the New Poor Law Act of 1834. The drama tells the story of seven people forced by circumstances beyond their control to enter the workhouse.  The cast includes Mick as 'Mark' a feckless pauper, Roy Clinging as 'Richard' a former hard working pauper, Judy Dunlop as 'Jane' a childless pauper, Heather Bradford as 'Helen' the wife of 'Mark', Maggie Boyle as 'Mary' a widow pauper, Paul Downes as a tramp and also the workhouse master and Phoebe Kirrage as a workhouse child.

The question has to be asked, of course, as to whether the play transfers successfully to a purely audio performance on CD. As with previous works of a similar nature by Mick Ryan it does so because many of the songs work as 'stand alone' items and also because the occasional spoken narrative in between the songs keeps the listener informed of the story line.

As can be deduced from the cast list the performances are all excellently executed. The one name that most people will not know is that of Phoebe Kirrage. She is a fourteen year old lass but sounds a far more mature singer than her young years suggest. Look out for her because I think she'll make her mark in years to come.

As far as the songs are concerned the title song 'The Pauper's Path' certainly lends itself to extraction as a stand alone work as does the opening song 'The Workhouse' and the optimistic 'The Path to Hope'.

It is impossible in a short review like this one to comment on all of the 28 tracks but I must say that Paul does a credible Midland accent on 'This is the Workhouse', 'You Can't Have That' and 'Industry, Usefulness, Virtue'. Also his superb guitar work percolates throughout both CDs. Among the songs that impressed me the most was Judy's melancholy performance of 'My Child' and also Mick singing 'In Their Eyes'. Maggie shines on 'Where Shall I Go?' too.

Because of Mick's seemingly endless talent as a song writer the whole show keeps the listener's attention throughout the two recordings and you don't necessarily have to have seen the show live to appreciate it. The notes in the cover booklet give the background to the songs and the story and useful information about each of the performers.

This is yet another accomplished work of musical art from Mick and his associates which I can recommend whole heartedly.

Mick Ryan was commissioned to write a folk opera

based on research into the workhouse, particularly

that of Southwell, Nottinghamshire, now a National

place in June 2011. As would be expected Mick

fulfilled the task admirably. This is the album of the

show and, in the course of a double CD, the

listener is transported into the lives of seven

Traditional music has a penchant for dwelling

on the darker aspects of life but the grinding

poverty that forced people to be admitted to the

workhouse, is rarely explored in song; there is little

scope for romanticism or pathos. If life outside the

workhouse was harsh, life inside was much

harsher: the cost of running the workhouse fell to

the local ratepayers. It was the refuge of last resort

The twenty-eight songs portray the lives of five

paupers, a tramp, and an orphan girl, with two

from the workhouse master, in which irony serves

to underline the severe conditions: 'this is the end',

'entry's free', 'poverty's a crime'. With the variety

of song style and the narrative lyrics depicting the

characters' lives, the audience is drawn into their

raises a smile through his sheer enjoyment of

emphasising the reality of his cruel domain; the

orphan, Phoebe Kirrage will touch the heart of all,

as will Jane (Judy Dunlop) who regrets not having

a child, and Mary (Maggie Boyle), a widow. Richard

(Heather Bradford) are delighted to be separated!

With Paul playing an array of stringed instruments

and Maggie on flute and bodhran, the performance

Go to see it if it comes near you!

Following his highly acclaimed Voyage and Navvy's Wife, Mick Ryan has again come up with a truly amazing set of original songs (though Down Among The Dead Men has appeared on his earlier recordings) in this his latest folk opera, It relates the destitution, the harsh conditions but above all the hope and resilience of those ordinary people who have fallen on hard times.

The Pauper's Path company consists of Mick Ryan, Paul Downes, Roy Clinging, Judy Dunlop, Maggie Boyle, Heather Bradford   all accomplished performers in their own right   and Phoebe Kirrage, a young teenager with a great future ahead of her as a singer. I haven't as yet seen the live show, but even so I enjoyed the atmosphere and sense of purpose created by the 28 tracks on this double CD. Many of the songs could stand alone, but taken together they generate a real narrative. Mick Ryan has a real gift for writing songs that have a `traditional' feel to them, and certainly there are some songs that one feels could have been written in the era of the workhouse.

Inevitably, even amongst the high quality material presented, certain songs stand out for special mention. Free At Last is quite ironic   a man and wife welcoming the forced separation of spouses in the workhouse after years of an unhappy marriage. Workhouse Child catalogues the harsh regime in an ABC. Long Ago and Far Away, from Roy and Judy, is a powerful ballad looking back at the good times. It's the slower songs, however, that really steal the show for me: Time , from Heather, My Child, from Judy, and two numbers from Maggie   the haunting melody of Where Shall I Go, and, my clear favourite, That's My Storv   such a simple and attractive tune and a beautiful lament from a girl separated from her loved one.