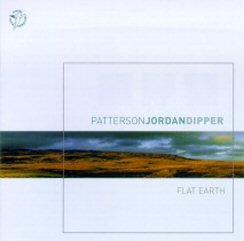 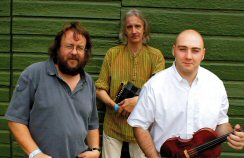 One of the best new English music albums I have heard for a long, long time! Mike Harding BBC Radio Two. This collection of material draws heavily on the traditional end of PJDs current working repertoire. Though all group members input into the choice of material, the song ideas tend to come from James. Although not all of the songs are traditional they are performed with a traditional sound and acompanied by a range of instruments including: fiddle, concertina, guitar, mandolin, bass and in one case Hammond organ.

We think Patterson Jordan Dipper is extra special - hope you think so too!, says the scribbled note from the LT office which accompanied Flat Earth. In other words, Slag off this one if you dare! I enjoy a challenge, so I attempted find something to criticise. Fat chance. WildGoose are developing quite a reputation for excellence in production, and this CD is well up to standard. The inlay, with its atmospheric images, is a model of elegant restraint - and thats before you get to the eclectic choice of songs and their impeccable arrangement and interpretation.

Patterson and Jordan had been around the musical block but they only met Dipper at Whitby in 2000. An empathy remarkable given such brief acquaintance is evident on material as diverse as The Game Of All Fours, with its erotic echoes of the chess game in The Thomas Crown Affair, to Ewan MacColls The Manchester Rambler with additions by John Tams. Even well-worn numbers like Rounding The Horn and William Taylor sound newminted, sprinkled with the angel-dust of Jordan and Dippers sprightly accompaniment. A surprising inclusion is Flanders and Swanns The Slow Train, with just the right elegiac yet urbane note struck by Pattersons vocal. Patterson has a wonderfully expressive voice,virtually devoid of mannerism and the ornamentation affected by some revival singers, which allows the songs to breathe and words heard maybe dozens of times to resonate afresh in the mind.

There is a reassuringly solid feel to the whole CD, reinforced by the complete absence of flash playing just for the sake of it. We had fun making the recording, says Patterson in his inlay notes and it shows; Flat Earth is a box of delights which simply could not have been created by going through the motions. Extra-special? Yes, I think thats about right. Review by Dave Tuxford for The Living Tradition magazine

I'd been told about this CD by a couple of friends. Somehow I had not got around to hearing it until this review copy belatedly found its way into my hands. And am I glad it did.

Every so often an album hits you right between the eyes with a startling intensity. This emphatically is one such. I am enthusing about it to all and sundry.

Let's begin at the beginning, for all you non-Brits reading this. My hunch is that unless you are a real aficionado of English Traditional Music, these names may be new to you. Indeed, they are not exactly household names in their own land.

But James Patterson and Ralph Jordan have made their mark on the British scene, first as the little-known duo Silas and later, as part of the better-known Crows. Plus, they have made other ventures: for instance, the only time I ever spoke to Ralph, he was part of the Fraser Sisters stage act. But, fiddler John Dipper is a new name to me, and I guess, to most of the regulars in Britain's folk clubs.

And these three have formed the most glorious trio, where their multi instrumentalism and Patterson's solid vocal delivery (indicative of a wysiwyg persona if ever there was one!) address a selection of some of the strongest songs this side of Paradise.

You know, whenever I review an album, I always look for the positive. But here, so much WAS positive, that I looked very hard for a negative: just to give my review some necessary verisimilitude. And I am clutching at straws a bit, but I think I have found ONE track not to my satisfaction.

Not that they delivered it badly  they did a solid job on it  but I figure there really MUST be a moratorium on recording �William Taylor�! If I hear it again before I depart this Vale, then I swear it will be too soon. It has been flogged to death.

But the REST! What gems! There were about five I would particularly go to the barricades for: John Tams's wonderful re-working of Jimmy Miller's �The Manchester Rambler�, Pete Morton's best song �Maybe Nothing Spoken�, Bill Caddick's �Flat Earth��and then two sensational cuts.

Hearing this made me realise how Flanders & Swann are neglected in the folk clubs: and that is a crying shame. Some of their songs are first rate.

But the real masterpiece is Mike Waterson's magnificent song �Working Chap (What A Crime)�. I recall when I first heard Mike sing this song: it was at a National Folk Festival a decade or so back. The force of the song virtually knocked me over. I couldn't get it out of my head for weeks. Indeed, even now, I get frissons just thinking of Mike's delivery that day.

And how well Patterson Jordan Dipper present it. They prove the song as relevant today as when first I heard it.

A quite outstanding album. My only regret is that I did not review it when it came out: had I done so, there is every possibility it would have made my Top Five albums for that year.

A new band called Patterson Jordan and Dipper came to my attention this week.

I know some of the individual members of the band, but I've not heard anything by the band before.  They've got a new album just out called 'Flat Earth' and its one of the best new English music albums I have heard for a long, long time!

James Patterson Ralph Jordan and John Dipper are not new musicians to the scene by any account, they've been around for a while, but they all got together as a band at Whitby festival a couple of years ago and the result I think is absolutely brilliant!

This is an album of English music, mostly traditional, beautifully played and sung, and well worth taking a good long look at.

And one I really like is the Flanders and Swann song, Slow Train, which I'll try and play for you in a couple of weeks, but have a listen to this, from the album Flat Earth, this is Patterson Jordan Dipper and it's a very idiosyncratic version of The Manchester Rambler, a combination of the Ewan McColl song and extra words which are pertinent today, which have been added by John Tams

That was The Manchester Rambler by Patterson Jordan Dipper and its from their album Flat Earth.  I particularly like the way they have juxtapose the Ewan McColl version there with new words by John Tams.  I'll play another track from that album before the end of the program.

Now, as I promised earlier here's another song from the new album by Paterson Jordan and Dipper, the Album is called Flat Earth and from it this is an absolutely brilliant version of Rounding the Horn.

That was Rounding the Horn there, given an entirely different and update version from Patterson Jordan and Dipper off their new album Flat Earth.  Well I'm sure we are going to be playing lots more tracks from that album in the weeks to come

The Engish tradition is growing in status once again and with this fine trio at the forefront we have a lot to look forward to. From the opening bars of Rounding The Horn featuring James Pattersons rich (sorry about the clich�) vocals and full bodied accompaniment from Ralph Jordan and John Dipper you can just tell this album is going to be a cracker. A jaunty version of The Game Of All Fours follows and the modal key change of Adam The Poacher will prove challenging for the more musically inclined. If you remember The Manchester Rambler by a certain quartet of the 60s/70s put aside your prejudices for here is a glorious version courtesy of John Tams and I have to say Im totally won over. PJD have obviously spent hours in working out their arrangements and it shows as there isnt a whiff of� Lets make life easy for ourselves. I must admit to a preference for the more traditional material such as One Night As I Lay On My Bed with its combination tones of duet and English Concertina playing counter melodies and the nice touch of a caper (surely theres a Morrisman just waiting to break out?) at the end of the song. Another song that took me (pleasantly) by surprise was the subtle arrangement of Hares On The Mountain by Chris Wood - and there was I expecting the Steeleye Span version. As I said before, there was a time when the likes of Bandoggs, Crows, Kitsyke Will and the House Band were kings of the hill and theres no reason why PJD couldnt recapture some of that magic again. If like me youve been brought up on a diet of all things Celtic why not for a change experience a slice of our OWN culture. Who knows, you may even enjoy it.

QUALITY Assurance is the phrase that immediately springs to mind, when confronted with a new CD from the likes of the Fraser Sisters, Tanteeka or Wood/Cutting, and this new trio, an extension of that same fraternity, offers that same guarantee of a well?crafted product.

Multi?instrumentalist Ralph Jordans pedigree is impeccable and, with fiddler/English concertina player John Dipper of that concertina?crafting family, hes teamed up with singer/guitarist James Patterson to create as dramatically arranged a set of English folksongs as you could wish to hear. Pattersons unaffected, naturally?phrased vocal is a joy and nestles comfortably into a string of highly original instrumental accompaniments of songs ?largely traditional, with a sprinkling of Mike Waterson, Ewan McColl and Flanders & Swan.

Jordans love of modal invention and Scandinavian rhythmic intricacies is let loose on Bedlam/Annas Brudvals, while the dark, brooding Captains Apprentice ? surely A Sailors Life of the new millennium ? contrasts with the bright, spiky concertina/fiddle/mandolin arrangement on William Taylor.

This debut album states irrevocably that PJD are on their way up.