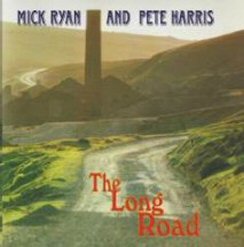 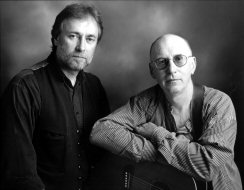 This is the fifth album from Mick and Pete. It includes original compositions from Mick, songs from his shows and traditional songs arranged by Pete. Many of the songs can be linked either figuratively or literally to the concept of the road. The varied and often intricate accompaniments include: Pete Harris on guitar, bouzouki, mandolin, mandola , fretless base, banjo and whistles fiddle from Steven Faux and oboe from Paul Sartin of Belshazzars Feast and Dr Faustus

Mick Ryan is well known on the folk scene as a fine singer of traditional and original material. Throughout the eighties he was seen at clubs and festivals as lead singer with the very popular Crows. Reviewing the bands second album, Folk Roots described him as definitely the most underrated singer in the country. Having written both comic and serious songs for the band and having been co-author of a stage musical performed at the Barbican in London (1987) and the lyrics for a Radio 4 drama, Mick continued writing and singing after the band split up in 1988. Subsequently he was author/co-author of songs for the hugely popular folk musical A Tolpuddle Man, this with Graham Moore, with whom he formed an acclaimed performing and writing partnership.

Mick has written three more folk musicals, A Days Work about the first world war, The Voyage which is about emigration to America in the mid 19th century and just premiered Tanks for the Memory. Both the first and the second of these shows have been on tour around the UK and Ireland to great acclaim.

Pete Harris is a talented multi-instrumentalist and singer(guitar, bouzouki, mandolin, mandola, banjo, bass guitar, whistle). On the folk scene Pete has worked with a number of successful bands including The New St. George and The Bursledon Village Band and is also a fine solo performer. Outside the folk scene he has featured as singer and lead guitarist with a number of blues and R&B bands, most notably The Bob Pearce Blues Band with whom he performed throughout the U.K. and on the Continent, recording a live album on the Blue Horizon label. Pete is currently leading the 6-piece Pete Harris Blues Band.

Since their formation as a duo in 1993, Mick and Pete have played at folk clubs and festivals throughout England and have released four albums previous to this one. They were performers last year at the prestigious Sidmouth & Warwick Festivals as well as at numerous other festivals.

This is the fifth album from Mick Ryan and Pete Harris and includes original compositions from Mick - songs from his shows - and some traditional songs arranged by Pete.  As I had not come across any of their previous recordings, I was not sure what I would make of it!

There was no mistaking the great singing of Mick Ryan and fine accompaniment from Pete Harris.  All the songs on this album have a traditional feel and sound to them.  Mick Ryan has the ability to write songs which sound traditional - so much so, that I was thinking where had I last heard the chorus?

I particularly liked some of Pete Harris's arrangements of the traditional songs such as The Black Horse and Time to Remember the Poor.   Pete plays most of the instruments on the record including guitar, bouzouki, mandolin, mandola, fretless base, banjo and whistles and overall sound is first class.

I have enjoyed listening to this album immensely; the quality of Mick Ryan's singing and songwriting shine through, with some fine playing from Pete Harris backing this up.  My favourite tracks are Song For John and The Wrong Side Of The World.

This is the fifth album from Mick and Pete and what a delight yet again. From the pun ridden Holmes and Watson and the throw away Desperate Dan to the poignant and moving yet never over?sentimental Song For John and the superbly arranged traditional song The Crafty Maids Policy we have the essence and range of this duos repertoire.

As might be expected there are a number of Micks own songs as well as a good smattering of traditional material arranged and, in some cases, extensively revised by Mick and Pete.

Add superb instrumentation from Petes wide acoustic range of implements as well as guests Steven Faux on fiddle and Paul Sartin (almost a resident at Wild Goose these days) on oboe and you have an almost perfect range of accompaniment to Micks firm voice.

Petes inventive harmonies on most of the songs serve only to enhance them even further. All the songs have a sort of inherent link with `the road hence the title of this album.

I particularly liked the opening track The Road to Dorchester an up tempo song with strong social comment taken from the folk musical `A Tolpuddle Man.

The unaccompanied Poppies sounds very Keith Marsden in style but was written by Mick.

Modern technology came to the aid of Mick for the original words to Time To Remember The Poor which he obtained from the internet. Paul Sartins oboe on this track is especially apt.

One song which does stand out from the rest both in terms of its origins and its style is Strange Fruit originally made famous by Billie Holliday and sung solo unaccompanied by Mick with a genuine depth of feeling.

Mick and Pete finish in fine style with The Wrong Side of the World another song from `A Tolpuddle Man which might well appear in my own repertoire eventually as yet another funky number! Ill let your imaginations run on that one!

eager recipients. However I won and I can report that it is even better than

their last recording, which is something I would have thought pretty near

impossible. The material is a skilfully blended mixture of original songs by

and backing. Mick supplies most of the vocals with subtle harmonies by Pete,

The Bonny Irish Maid. They are not afraid to inject humour into their work

Desperate Dan. The first is a tongue-in-cheek look at the eponymous heroes

adventures whilst the second was composed whilst driving from Weymouth to

Dorchester near to Upwey, the place of residence of a certain Mrs Marina

Russell, the 19th century singer known for the more risqu� numbers in her

repertoire. Definitely a case of having the muse settle on him, Mick has

and procreation. As an example, where else could you expect to hear the words

fecundity and rotundity in a rhyming couplet? Its also an interesting

form of charging her husband a pound per inch, although Desperate Dan does

plead to be charged on the way out! On the instrumental side Pete has

banjo, mandolin, mandola and bouzouki alongside his usual guitar in various

combinations around their songs. The addition of fiddle, fretless electric

couple of blokes singing songs. Nothing could be further from the truth,

these guys are extremely gifted musicians who, to quote an old clich�, are

more than the sum of their parts. Ever so much more. I reckon that this CD is

the one that will bring them true national recognition, proving yet again

that given a shot in the arm from such as this magnificent piece of work, the

has always had. Hugely entertaining, beautifully played and sung this is

going to be a hard act for anyone to follow. Dont hesitate, buy it now, long

before it becomes an album of the year, and get that much more pleasure from

A collection of traditional arrangements and new songs, mostly on the common folk theme of struggle and oppression. The vocals are strong even though the style is unoriginal. The harmonies are mostly good and the musical back up is varied and competently done. Curiously, some phrases in Time to Remember the Poor reminded me of Bert Jansch, and the oboe was reminiscent of a John Renbourn song. Bonny Irish Maid was a nicely done traditional song, although I would have preferred a vocal break with the whistle instead of it playing most of way through over the vocal. One song written as a light hearted tribute to a great pair of Victorian sleuths had a melody and structure very similar to My OP Mans a Dustman. Presumably designed as a light break and fine for the clubs but not sure it works that well on record. The Two Sisters was particularly touching in its content, with a nice Irish feel to it. Whistle playing all through again but it works better on this song. Song for John is a sensitive tribute and the lyric content is touching. Voices from the Past is an attempt to rock things up. The song is fine but the arrangement didnt work in my view. Desperate Dan is another lighthearted original song this time sung unaccompanied. There is plenty in this CD for lovers of traditional song to enjoy.