by Tom and Barbara Brown 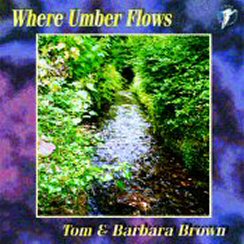 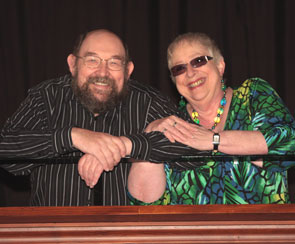 Tom and Barbara returned to their beloved West Country in 1998 and now live in the village of Combe Martin on the North coast of Exmoor. The CDs title derives from the River Umber which flows down the valley to the sea, past the bottom of their garden. As a result of both local research and involvement in the extant singing traditions of Devon and Cornwall, their performance repertoire has always been diverse and unusual ranging from humourous dialect items to the classic ballads. Tom and Barbara are each soloists in their own right but also join in harmony and use accompaniment where they feel it is appropriate. Tom plays concertina, guitar, melodeon and mandola - also featuring the talents of Keith Kendrick concertina, Charlie Yarwood bones and vocals, Chris Bartram fiddle and Keith Holloway melodeon

Tom and Barbara Brown have recorded a CD of their own after, at least, 25 years of activity on the folk scene. Many people will be saying About time too and thanking them for inspiration and encouragement given at some time during those years, for the Browns are that kind of people. Wherever they have gone, music and song have followed They have started clubs, helped organise festivals, run sessions and workshops, (they are peerless singaround leaders) and they have researched songs that then went back into circulation. They did all of this when I first knew them in their beloved West Country, and later in London where they ran one of the big citys best folk clubs. Back in the West they were instrumental in bringing some village customs back to a vigorous life then, typically, leaving its continuance to the local people because, as they said to me, It Belongs To Them. They are activists of the best kind, ever eager to spread the music and the word and to encourage the participation of as many people as possible. In short, doing the EFDSSs work, whether under that banner or not. Along with the likes of Ron Angel (Stockton), Dave & Ruth Cooper(Nottingham), Ted & Ivy Poole(Swindon), they should be high on the list when medals for services to..., or the Societys Gold Badges are being dished out.

As for this album, well its a good one, full of handsome songs and tunes with something of a West country bias, not surprisingly, sung with the honest straightforwardness that is a Brown characteristic. They know when they have a good set of words and they let them do their work. The names of Devon and Cornwall musicians past and present crop up, such as Bob Cann, Mervyn Vincent, Dave Huthnance, and collectors like Baring ?Gould and the Hammond brothers. Outside of that we get a lovely Australia/New Zealand collaboration on The Flying Cloud and a New Bell Wake from Tom & Barbaras .Regalia days, with former colleague Charley Yarwood joining in. The Browns are folk who like to sing with other folk, which explains the ten others who give instrumental and vocal backings throughout. Nice to see that daughter Freya is among them. Another nice touch among a whole album full of nice touches is that the title tune Where Umber Flows, played by Tom Brown, Keith Kendrick, and Chris Bartram, is named after a local river, and was written by Barbara.

When one considers the speed with which artists put out Cds these days it's a little surprising that this duo have only just produced their first CD and have not got a back catalogue of vinyl waiting in the wings. However, as one might expect from an album that has been thirty something years in the making, the craftsmanship and quality shine through.  In performance, Tom and Barbara set out to entertain with material firmly rooted in the tradition, and succeed in making their music accessible to a wide-ranging audience, through their infectious enthusiasm and love of the songs they sing., and this quality has successfully been captured on their recording.  The content is varied and consists of two instrumentals, five unaccompanied and seven accompanied songs many of which unsurprisingly have a West Country pedigree.  The singing is pleasantly powerful and Tom's accompaniment complementary but unobtrusive.  I particularly like the quitar Tom puts beneath Barbara's super rendition of 'Jordan'

- spine tingling stuff.  I also really enjoyed Barbara's version of 'The Green Cockade' and their arrangment of Bob Cann's song 'Craftsmen of the Moor', not to mention the rousing revival of 'Norton New Bell Wake' from a time when the duo worked as 'Regalia' with Charley Yarwood who they persuaded out of retirement to join them on this track.  All in all a commendable showcase long overdue.

This is a delightful album featuring a couple from the English west country. Naturally, they turn to their region, Devon and Cornwall, for material, presenting a number of different versions of songs known throughout the islands, such as The Unquiet Grave and The Green Cockade, along with some rarer pieces. They have warm, moving voices and are often accompanied by some fine singers on choruses. Accompaniment includes melodeon, concertina and fiddle along with more modern instruments such as guitar and mandola, and the unusual but effective bass trombone. Songs on the album range from music hall through the humorous to sorrowful; but their version of The Flying Cloud is devastating, one of the best Ive ever heard of this deportation song.

Tom and Barbara have been stalwarts on the folk scene for ages. Then a couple of years ago they left London (wise!) for Exmoor and this CD basically reflects their love of and interest in the traditional music of Devon, Cornwall and the West. Good, solid singing and playing and a good variety of songs from Bob McCanns Dartmoor Song to a very nice version of The White Cockade (this time its green) from Moe Keast of Bodmin which has Barbara with an all?girl chorus (countered later by Tom and all?male backing on The Wives of St. Ives from Mervyn Vincent of N. Cornwall). Charlie Yarwood joins the couple as a re?formed Regalia on

Norton New Bell Wake to the tune of Ranting Rearing Boys for good group harmony stuff. From classics like The Flying Cloud to Pete Mundays Take Your Time, its all good, and with backing musicians like Dave Webber and Anni Fentiman, Keith Kendrick, Charlie Yarwood and Chris Bartram et al, it would be.

Ive always rated Tom & Barbara Brown highly as singers, but have only heard them do a few songs during an evening, never as guests, and little over the last few years, as they have only recently moved back to North Devon. This CD, therefore, came as something of a surprise, and an absolutely delightful one at that

The album, with a definite West Country bias, is a superb selection of songs which do justice to their versatility, from the comic Mortal Unlucky Old Chap to the sympathetic and, I must say, emotionally moving, rendition of Jordan. Id hitherto regarded the ballad The Flying Cloud as rather over?long and tedious, but Toms version is compelling listening. Its quite unusual to declare that I enjoyed every track on an album, but this is genuinely the case here. There are a couple of instrumentals and Tom & Barbara are well supported by an impressive lice?up of well?known singers and musicians (too many to name in a short review!) on choruses and accompaniments.