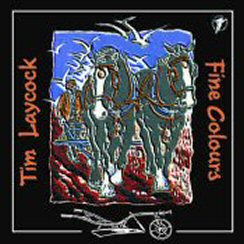 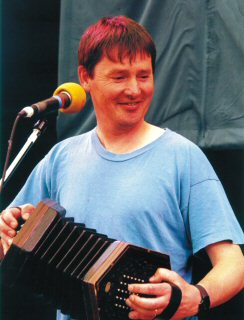 English songs old and new, by a leading light of the tradition and a superb concertina player.

Tim is one of Britains most captivating performers he has a natural affinity with his material, an understanding of his repertoire, which brings both old and new songs to life without any gimmicks. If youve ever seen him with The New Scorpion Band, youll know what an excellent bunch of musicians they are and its a bonus to have them filling out the instrumental lines. Theres some lovely stuff here. Ive never heard a better version of The Horseman, while Tims writing skills are highlighted by Stormalong and Comfrey. Robin Hood and the Bishop of Hereford is a particularly wacky ballad, collected in Dorset 93 years ago from a man who had learned it 60 years before. When Tim sings a song, you feel as though you can reach out and touch it as if it were yesterday Taplas

Tim Laycock is a British folksinger, songwriter, actor and renowned duet concertina player who has worked with groups such as the Kipper Family and the Albion Band. On this release, he accompanies himself on a number of instruments (including the concertina, hardy gurdy, and melodeon), and is assisted by five of his fellow travellers in the New Scorpion Band. The 13 tracks range from traditional songs (mostly of the West Country and East Anglia) collected from long?gone British singers (Robin Hood and the Bishop of Hereford), old music hall songs (Jack Robinson), English country dance tunes (Shrewsbury Lasses/Over the Hills to Glory) and original pieces (Stormalong). One of the standouts of the release is the fine opening track, The Horseman, a traditional piece about the passion of the dedicated horse owner. Throughout, the songs reflect the values of an earlier time.

One of the advantages of being a reviewer is that you get records by people you have never heard of. Another is advantage is that when you hear something new and unfamiliar you cannot discard it after listening to it once and twice. After all, the item you are going to review has meant a lot of work to somebody, and as a reviewer you have an obligation to make a fair and sound judgement.

These thoughts are very clear to me after spending more than a month in the company of Tim Laycock�s Fine Colours. At first, it seemed to be one of those also-ran CDs with nothing to really catch your attention. It ran on the CD-player in my home office about a dozen times and was constantly pushed away with excuses like, I will do the Mick Ryan and Pete Harris CD first, but then...

And then all the other CDs had been reviewed, all the washing ironed and all the dishes done and I had to start the serious work. So I brought Fine Colours and a portable CD-player on the way for a job interview in another part of Sweden; and suddenly, stuck on a train, out of the daily stress I discovered what has during the last week become a new favourite.

In spite of having written some of the songs himself, Laycock�s CD is a very traditional CD. It is firmly rooted in the south of England, natural since Laycock himself is from Dorset. Many of the traditional songs are from that area and you can trace his influences from English folk, traditional music hall and even mediaeval music. It is a very low key CD, totally acoustic with Laycock�s concertina prominent throughout. Laycock does not force his way into your head, he is there waiting for you to come to him, offering the music rather than pushing it on you.

The record starts with The Horsemen, from which the title is taken, with an almost drone-like backing and a solo performed on oboe and whistle. It moves on to Jack Robinson, a jolly music hall tune, and then The Cuckoo, a well-known English folk song recorded by Pentangle among others. Laycock does a gentle reading of it, backed only by his concertina. Shrewsbury Lasses/Over the Hills to Glory is an instrumental medley and one of very few weaks spots on the CD. The treatment is too hesitating; and, to my mind, it would have needed a guitar or another rhythm instrument to shine.

Wounded Soldier, one of Laycock�s own songs, is coupled with Sing me to Sleep, a send-up of sentimental soldier ballads. The song is marked as traditional, but judging from the lyrics it must be from the 20th century. It inludes some superb lines:

Sing me to sleep where bullets fall/Make me forget this war and all, I long to be where German snipers can�t bother me and where campfires blaze, boiling water for caf� au lait.

The Peace Tree is one of the highlights. Composed by Laycock himself and performed a capella, it deals with how to nurture peace. It is a very symbolic and traditional sounding song which makes me think of Pete Seeger�s reworking of traditional songs into modern ballads. Florence Wyndham by Phil Hewett is an intriguing song of love, death and starvation. It is said to be based on a true story from the 16th century and has a twist in the tale that took me a few hearings to find.

Billy Johnson�s Ball is more music hall and is followed by another jewel of the album, Hanley Chruch Bells. Laycock has set music to an early 19th century poem. A lovely work where Laycock at the end lets his concertina do a great impersonation of English church bells.

Robin Hood and the Bishop of Hereford is one of the many ballads about the gentleman robber. With concertina, fiddle and recorders it is one of the most mediaeval-sounding tracks. The Village Club Waltz is the best instrumental. Written by Percy Spencer in 1923, it is almost classical in its construction, like a rondo: a waltz that makes you want to listen time and time again.

The CD ends with two more real highlights. Stormalong is one of the best-known shanties. Under the name of General Taylor, it has been recorded by Fairport Convention, Steeleye Span and Great Big Sea among others. Laycock has used his own imagination to create a story in song about this  Stormalong. The track starts off with an instrumental rendition of the shanty, turns into Laycock�s song and finishes with the shanty.

Comfrey is another of Laycock�s compositions. Based around a story from the English Civil War it is a strange track, with a mixture of spoken word and song. It works very well. The track has a haunting feeling and the flute solo suites it perfectly. The chorus is one of those that stick in your head after hearing it just once or twice.

If you are looking for a soft, sweet CD to really listen to, in contrast to those you only hear while doing other things, this might work. It will certainly reward the effort of any concentrated listening.

Its hard to imagine a folk scene without Tim Laycock. He seems to have always been there. Yet he always seems to be best remembered as the person who worked with ...Magic Lantern, Bill Caddick and Fete Bond, Taffy Thomas etc. etc.

This recording sees him working with his colleagues from The New Scorpion Band including Colin Thompson whose fiddle and viola underpin Tims duet concertina and melodeon very nicely. The whole recording has a very gentle feel to it, very reminiscent of Victorian and Edwardian parlour ballads. Hardly surprising, given that thats the era from when some of the material (Jack Robinson, Billy Johnsons Ball and the very whistleable Village Club Waltz) dates. The tune sets are light and bouncy, and Tims duet playing is as ever, exemplary. We have the obligatory Lets make the concertina sound like a peal of bells song, and this is one of the best Ive heard. Favourite track in the Parkes household is also the most unlikely. The half sung, half spoken Comfrey (based on a legend from Thame, near Towersey) has a melody that stays in your head for days. Ive just run the spellchecker over this review, and in one of those strange quirks of fate that happen, it suggested `layback for Laycock.

Thats the whole keynote of this recording ...laid?back. I think this is due to the sequencing of the tracks ... played on a posh CD player with random play facility it sounds totally different. Still, as my granny used to say as we regularly argued over Sunday tea and Sing Something Simple It doesnt all have to be crash, bang, wallop you know.

DOUG Baileys fine label is turning out some impressive stuff. Tim is one of Britains most captivating performers and between them theyve crafted a CD that will certainly earn a place on the favourites shelf of many an admirer.

Tim has a natural affinity with his material, an understanding of his repertoire, which brings both old and new songs to life without any gimmicks. If youve ever seen him with The New Scorpion Band, youll know what an excellent bunch of musicians they are and its a bonus to have them filling out the instrumental lines.

Theres some lovely stuff here. Ive never heard a better version of The Horseman, while Tims writing skills are highlighted by Stormalong and Comfrey. Robin Hood and the Bishop of Hereford is a particularly wacky ballad, collected in Dorset 93 years ago from a man who had learned it 60 years before. When Tim sings a song, you feel as though you can reach out and touch it as if it were yesterday.