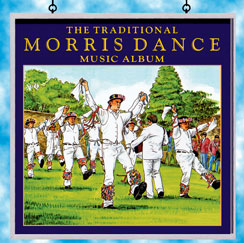 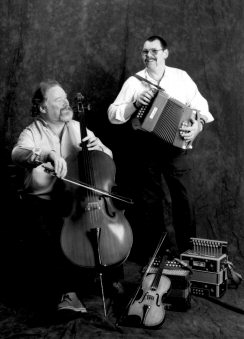 A century and a half ago, young men in and around the Cotswolds, the Welsh borders, Lancashire and Cheshire, and to a lesser extent, in other parts of the country, would, at specific times of the year, dress up in flowered costumes, and perform what they knew as morris dances. These varied in style according to the locality. In most cases the dates on which they danced coincided with quiet times on the farms.

This album has been re-released in conjunction with Talking Elephant. It was originally released by MCI.

Nobody really knows where the origins of morris dancing lie. Is it, as used to be commonly believed, the last vestige of an arcane fertility ritual? Or is it, as most modern scholarship suggests, a survival in the villages and towns of parts of England of fifteenth and sixteenth century courtly dance entertainments? What is certain is that a century and a half ago, young men in and around the Cotswolds, the Welsh borders, Lancashire and Cheshire, and to a lesser extent, in other parts of the country, would, at specific times of the year, dress up in flowered costumes, and perform what they knew as morris dances. These varied in style according to the locality. In most cases the dates on which they danced coincided with quiet times on the farms, and the dancing was a way of supplementing meagre rural incomes. Traditional morris dancing fell out of favour in most places by the end of nineteenth century, continuing in only a handful of locations into the second half of the twentieth century.

The tunes on this album were mainly written-down from the recollections of old dancers and musicians in the first quarter of the twentieth century. by people such as Cecil Sharp, and George Butterworth. Many of these relate to local traditions which we've indicated alongside the titles. The exceptions are those from the North-West, where the tunes are not as closely associated with the individual dances and traditions. We try to play appropriately, however, the music is not played specifically for dancing. The tunes may vary a little from 'standard' versions, as they came to us orally. Those tunes from our own living tradition at Abingdon are of course definitive!

Early references to the morris talk of the dances being performed to the pipe and tabor, a combination of a small drum played with one hand and a form of penny whistle which with three holes, rather than the usual six could be played with the other. Charles Spicer performs this act of ambidexterity in the introduction to 'The Queen's Delight'. During the latter years of the seventeenth century the fiddle became popular. This was played in a manner quite distinct from the classical violin: a style in which I am proud to carry. In 1832, Charles Wheatstone invented the concertina, which in a modified form became popular with the generation of morris musicians born in the last quarter of the nineteenth century. The melodeon developed in Germany from the concertina. Keith plays modern French instruments on most tracks, but on 'Swaggering Boney' and 'The Ladies Pleasure' he uses an old-fashioned single-row instrument, complete with the dancing sound of the instrument's action! In the past the dancing was usually accompanied by a single musician. More recently it has become the practice within Cotswold morris for two or three melody instruments to play together, perhaps accompanied by some light percussion. In the Welsh borders, tambourines and triangles were added to the melodeons and fiddles, whilst in the North-West, groups including melodeons, concertinas, woodwinds, brass and percussion, owing much to nineteenth century military band music were popular.

The Musicians       Chris Bartram (fiddle) and Keith Holloway (melodeons) are both widely experienced musicians who grew-up playing for the traditional morris sides at Abingdon, Berkshire. This is one of the few places where morris dancing has survived from before the end of nineteenth century. They learnt directly from the preceeding generation of musicians, who were born in the last years of the nineteenth century.

For the North-West tunes on this album they are joined by Dave Townsend, English concertina; Charles Spicer, fife; Phil Humphries, trombone (who all play with The Mellstock Band), and

All the tracks on the album are traditional and have been arranged by Keith Holloway and Chris Bartram. 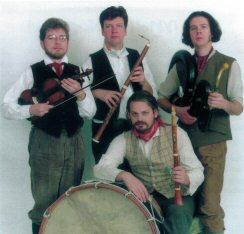